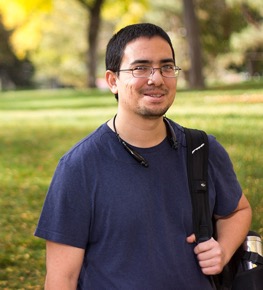 “What have I gotten myself into?” thought Byron Eng, as the bus driver yelled at him on the way to his first time at boot camp. He had recently graduated high school and joined the Air Force with his best friend. Being the committed man he is, he said to himself, “the easiest way out, is to go straight through it.” And that is exactly what he did. After a year and a half of language training, he was deployed to serve as a linguist in the Middle East.

The Air Force teaches many valuable lessons, but one in particular has been life changing to Byron. This is the lesson of discipline. Byron said that he spent most of his childhood playing video games, but after his experience with the military, he has learned how to work hard and stay focused. These skills have helped him to change his life direction entirely. He was previously working as a police officer in Maryland when he looked at his four-month-old daughter and decided he needed to go back to school to support his growing family. Studying Atmospheric Science is no easy task, and being disciplined has given him the ability to be focused and study for hours on end. This has opened many doors for Byron. He completed a prestigious internship with the NOAA last summer and is currently pursuing an M.S. in Mechanical Engineering.

Although Byron works very hard in school, he always makes time for his wife and two kids. He and his wife met studying language in the military, and have been happily married for seven years.