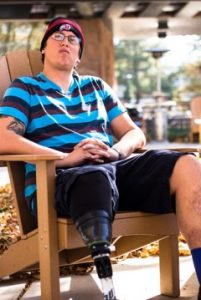 Christopher Haley is a proactive, optimistic, and determined individual who continues his life journey here at the U as an Athletic Training major. Previously, Christopher, at the young age of 17, enlisted in the US Army. Having been raised from military parents, service runs in his blood. He was assigned to Ft. Wainwright in Fairbanks, Alaska as a medic. He deployed with his unit, 1st Battalion 5th Infantry Regiment, 25th Infantry Division, to Kandahar, Afghanistan and was supporting an Infantry operation when he was wounded. “Next thing I knew, I was on my back facing up. As I tried to stand up, I realized something went terribly wrong. I looked down, and my leg was mostly gone and my ulna was sticking out of my shirt.” Having lost a leg and needing to lead his comrades through the emergency procedure, he said “I knew I needed to keep calm to keep my blood pressure down and make sure I didn’t go into shock.” He explained that losing a medic in combat can be one of the most devastating losses to an Infantry platoon, so he remained calm to keep his comrades calm.

After an 18-month recovery in Texas, Christopher realized he was ready to move on from the military. Having spent much time in physical therapy, he said, “I realize now that physical therapy was one of the most difficult experiences I have ever had to endure, but having comrades on your side that have gone through some of the same instances makes all the difference.” Christopher was inspired to help people through the recovery process after watching others progress and become stronger than ever before. “I see things in a different light…the simple things in life make me happy now. Not everyone gets a second chance, but I got it and I want to make the best of it.” Christopher found the Athletic Training Program at the U very appealing, as it has helped him on his way to becoming a physical therapist.

Christopher enjoys local band concerts – “I’ve always wanted to see a small band go big and say, “Yeah I got to see them play when they were playing out of a garage.” He is also a ‘gun guy’ and has built an AR-15 rifle with his dad. “Shooting is relaxing, there is something about smelling the gun powder that is very relaxing.”

Christopher has had some life-changing experiences, but his resilience and optimism are inspiring. The University of Utah is fortunate to have him aboard.