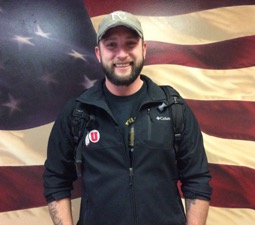 Nico Terreros enlisted in the United States Marine Corps and was sent to basic in San Diego shortly after. He was stationed in Hawaii where he was a Motor Vehicle Operator. Nico was deployed to Iraq where he worked closely with an artillery unit and was able to do a lot of cross training. He liked that he was actually able to do his job while he was there, AND that he got to learn a lot of other skills that would help him in his occupation and later in life.

Shortly after his discharge Nico started school at Salt Lake Community College. School to him was an opportunity to grow and continue to move forward in his life. He finished all of his generals at SLCC and transferred to the University of Utah to pursue his degree in Chemical Engineering. Nico has two and a half years left in his major and is not yet sure what he wants to specialize in, but he is interested in energy. For Nico one of the difficult things about moving from the military to civilian higher education was that he had many more choices as to what direction he wanted his life to go.