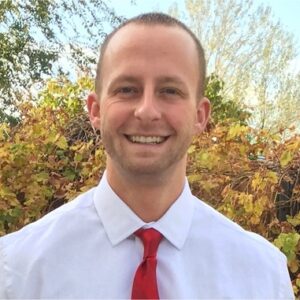 Andrew, the oldest of three, was raised in a military family where life in his household was pretty well-structured and “excuses” were hard to find. He learned firsthand, from his father, the support and knowledge needed to start his career.

After graduating with a bachelor’s degree in Public Health from the University of Arizona, he joined the US Army Reserves. In 2019, Andrew was activated and sent overseas in support of Operation Inherent Resolve (TF MED CJTF), leaving behind his new wife, who was pregnant with their first child.

In 2020, Andrew was accepted into the professional Master of Healthcare Administration program at the University of Utah and began his academic journey in the fall semester. While attending the U, he continues to work with a pharmaceutical company where he has been employed for 8 years and is currently a manager supervising healthcare staff and operations.

As Andrew continues with persistence and dedication to complete his graduate degree, his 15 month old daughter and loving wife provide him with the strength and support needed to reach his goal of a better future for his family.